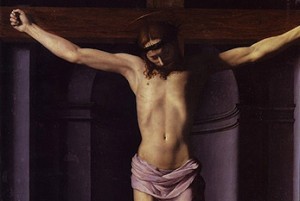 The Crucifixion of Jesus
So they took Jesus, and he went out, bearing his own cross, to the place called the place of a skull, which is called in Hebrew Gol′gotha. There they crucified him, and with him two others, one on either side, and Jesus between them. Pilate also wrote a title and put it on the cross; it read, “Jesus of Nazareth, the King of the Jews.” Many of the Jews read this title, for the place where Jesus was crucified was near the city; and it was written in Hebrew, in Latin, and in Greek. The chief priests of the Jews then said to Pilate, “Do not write, ‘The King of the Jews,’ but, ‘This man said, I am King of the Jews.’” Pilate answered, “What I have written I have written.”
When the soldiers had crucified Jesus they took his garments and made four parts, one for each soldier; also his tunic. But the tunic was without seam, woven from top to bottom; so they said to one another, “Let us not tear it, but cast lots for it to see whose it shall be.” This was to fulfil the scripture,
“They parted my garments among them,
and for my clothing they cast lots.”
So the soldiers did this. But standing by the cross of Jesus were his mother, and his mother’s sister, Mary the wife of Clopas, and Mary Mag′dalene. When Jesus saw his mother, and the disciple whom he loved standing near, he said to his mother, “Woman, behold, your son!” Then he said to the disciple, “Behold, your mother!” And from that hour the disciple took her to his own home.
After this Jesus, knowing that all was now finished, said (to fulfil the scripture), “I thirst.” A bowl full of vinegar stood there; so they put a sponge full of the vinegar on hyssop and held it to his mouth. When Jesus had received the vinegar, he said, “It is finished”; and he bowed his head and gave up his spirit.

“Were you there when they crucified my Lord?”

These words echo in our hearts as we read the Passion of Jesus. We witness the pain and suffering beyond what any human is capable of, yet this is what Jesus suffered for us, because of us, in place of us. Jesus’ sentence and death was unusually quick. He was arrested at dawn, around 6 A.M., tried, sentenced and nailed to the Cross around 9 A.M., darkness came over the land at noon, and He died around 3 P.M. If the people involved in His death had time to think about it, would they have realized what they were doing? We sometimes act on impulse, not really thinking about our actions, following the crowd and before we realize it, we are in over our heads, sinning more than we intended. Stop and think before acting, so that we too don’t follow the crowd yelling, “Crucify Him!”

Jesus was beaten, whipped, humiliated, and now is bearing the weight of all our sins (past, present and future) carrying the cross up Golgotha. Crucified with two other men deserving of death according to the law, Pilate thought he would mock Jesus and the pharisees one last time by posting a sign, “Jesus of Nazareth, King of the Jews”. There is one final denial of Jesus’ divine nature by the chief priests who wanted Pilate to add, “This man said he was king of the Jews.” There are those who will always deny Jesus, even while hanging upon the cross. We are called to be witnesses, even to those who continue to deny the truth that Jesus is Lord, or play games with the Word of God. Pray for them as Jesus did in Luke 23:34, “Forgive them Father, for they do not know what they are doing.”

At the foot of the cross were the three Marys, and the disciple, John, whom He loved. All of the other Apostles abandoned Him and hid in fear for their own lives. These faithful ones followed Jesus to the foot of the Cross, not fearing any man, but staying close to their Lord under any circumstance. Jesus is in extreme pain and suffering, yet some of His last words were in concern for His mother. From the beginning, His mother accepted the call of God. She encouraged His first public miracle at Cana. She was not only His mother, but His closest disciple and she came to love Him not just as her Son, but also as her Lord. She was now suffering along with Him, her heart also pierced as prophesied by Simeon. Mary was now about to lose her Son. Jesus could not leave her without having someone take care of her, so He tells her, “Woman, behold your son.” He then turns to John, “Behold, your mother.” With these words, Jesus is giving His mother to His beloved disciple – not only was He giving John, but He was also giving all of His disciples Mary to be our mother. Through the crucifixion of Jesus upon the cross, we became adopted sons and daughters of God. If God is our Father, and Mary is the Mother of God, that also makes her our mother!

Jesus says that He is thirsty and is given vinegar with hyssop. This fulfilled scripture and is a reference to the original Passover where they use a bundle of hyssop to paint the blood of the slain lamb on the doorposts. Finally, Jesus utters His last words, “It is finished,” and He gives up His spirit. Death did not overcome Jesus; He chose when to go to God. All had been fulfilled. Jesus completed the work the Lord had sent Him to complete and He no longer needed to hang there for days as was common with crucifixion. If it were not for our faith, it would be unbelievable that one man could change the entire world as Jesus did, from His birth, to His miracles and teachings, to His suffering and death. We need no other savior or king or popular leader. We have Jesus. It is finished!

It’s 3 o’clock somewhere. Get on your knees and look up a Jesus upon the cross.

My God, my God, Thank you for not abandoning me! My heart is broken by the pain and suffering you went through during your Passion. Thank you for taking my sin upon that cross, and for washing me clean by your blood. I look forward to the Empty Tomb! Amen.